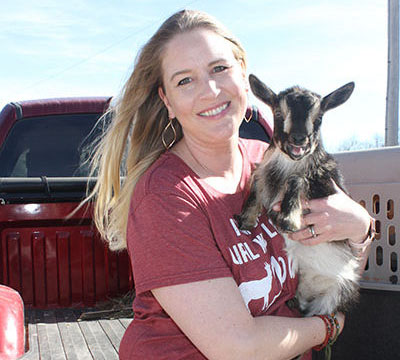 Shelby Lund of Spearfish, wrote her first book, “Goats in a Tote”, based on a true story of her Nigerian dwarf breed of goats. Photo by Mark Watson.

SPEARFISH — For Shelby Lund, her love of animals prompted her to purchase three goats for her family’s new farm located just outside of Spearfish.

That was in the spring of 2018 and she wanted animals that could not only bring pleasure to her boys and family, but also could provide revenue.

While she grew up riding horses, a horse accident in 2017 left her with a broken back, prompting her to look for a smaller animal to work with.

So she purchased three wethers, neutered males. They weren’t good for milking, obviously, but these were her “test run” animals to ensure she liked goats.

So she began researching the different breeds looking for a good milker. The larger goats would jump on vehicles, she didn’t want that, and finally settled on the Nigerian dwarf goat – good milkers that only grow knee high. That fall, she purchased four.

After those goats were bred and gave birth, Lund took the goats to the vet to get their shots, dewormed, and horns taken care of. And you guessed it, she took them in a tote.

After the vet appointment, she took them to real estate offices in Spearfish, to show her fellow real estate agents. It was at this time someone said, “Shelby that is so cute. you should write a book about the goats in this tote,” Lund recalled.

The book is, “A fun learning experience,” she said. “Baby goats are called kids, and just like human kids, goat kids have to go see the doctor. It is a learning book as well to have children understand about going to the doctor themselves and not being scared.”

She was initially going to self-publish the book on Amazon, but then someone mentioned Spearfish resident David Harding, who publishes books through his Painted Gate Publishing company.

Lund said Harding found an illustrator and the rest is history.

She sells her books personally, at the Spearfish Farmer’s Market, online, and will host a book reading March 28 at Good Earth Natural Foods in Spearfish.

“They are so much fun,” Lund said of her goats. “They each have their own personality. When you drive in, they’ll come running up to see you.”

Lund uses the milk to make soaps through her Lund Valley Farm. She hopes to use the creamy milk from the goats in a lotion soon.